"There may only be one winner, but the fact will never stop us from being victorious," Noor Azman. 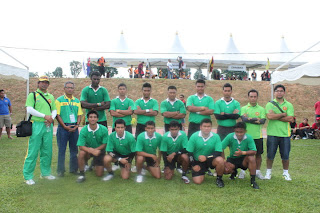 SUKMA 2010 Kedah Rugby Team (15-17 June 2010)
We went to Politeknik Merlimau, Malacca with high expectations, not only from ourselves, but from all the people back home in Kedah. With a much improved team compared to the last SUKMA in Terengganu (where we got bronze), we were right to expect a lot from ourselves. The team included a senior National Team player (and the biggest guy in the whole tourney), a Malaysian representative at the Korat SEA Games, a MASUM player and a number of instantly recognisable faces from the Malaysian rugby scene.
However, we knew that the road was not going to be easy, positioned in the same group as Kelantan (top 4 for 3 years running), Sarawak (4 national players in the side) and Selangor (SUKMA 2006 gold medalists). Ours was easily the toughest group in the tournament.
First day
For the first game, the first-game-nerves got to us against Kelantan. It just didn't click for us. It ended in a 12-12 tie, but we still felt that we could have won it had our game been better.
Second game against Selangor, we got our game together and came out 21-5 victors.
Third game against Sarawak, they presented less of a fight than we anticipated. We were able to contain them effectively and won 24-0. Yours truly played in this one, coming in as a substitute for the last 2 minutes of the game, scoring a try.
So with 2 wins and a tie, we were going on to the quarter-finals as runners-up of the group.
Second day
We only had one game on the second day, and that was against Negeri Sembilan. They were light and fast. Fortunately, size was on our side and with the help of the captain's reliable boot, we got through to the semi-finals with a 14-10 win.
Third day
We were up against Johor for the semi-finals. Quite an impressive side with a good balance of speed and strength. We gave a good fight, but in the end, luck (and the referee) wasn't on our side. We suffered our first loss of the tournament, losing by one try, 14-7.
For the bronze medal match, we faced a strong Sabah side. Their gung-ho attitude in attacking and defending were too much for us to handle, as we ended up losing 15-0.
So in the end, we got 4th. Disappointed, but not disheartened. And thankful.
For more pictures, videos and a more detailed report, please be a fan of this page. 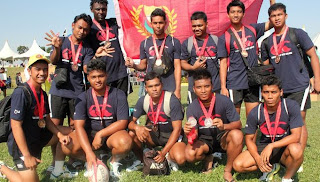 salam....congrats to your team. 4th place is good....awesome!(penguin would say that!)all the best to you.

Auntie Mahpuzah,
Wslm..
Now that I know who you are, I'm much more comfortable calling you Auntie Mahpuzah.. Takpa kan? :)
Hehe, thanks a lot Auntie.. Really means a lot to me..

yes..u can call me auntie. i like that. thanks to you i now have 12 frens compared to en rahman who only got 6. take care dear..