So it's been an interesting few weeks, with Pakatan Harapan winning, Najib resigning, the 1MDB papers being released, and Anwar Ibrahim being released from prison. Overall, there is this sense of optimism in the New Malaysian air. Everyone seems to be swept away by this feeling of euphoria, from achieving something most thought was impossible. It's a good time to be Malaysian, that's for sure.

All of this would not have happened if people didn't go out to vote the way they did on the 9th of May 2018. I had the privilege of helping people vote by being a Petugas Pilihan Raya (Election Officer), in the capacity of Pemandu Arah Pusat Mengundi (PAPM), or Voting Centre Guide (?). What the PAPM are tasked with is to facilitate people in their manoeuvring of the place where they were to vote. My Voting Centre was a school (the school where I was last a teacher), and in that school were four Streams or Saluran. Which Saluran you were supposed to be a part of depended on when you were born, with the oldest voters being in Saluran 1, and the youngest in Saluran 4. The PAPM are the people who helped voters get to their designated Saluran, and help those less able to walk on their own to provide wheelchairs if needed and be the facilitators of their movements throughout the voting process.

In this post, I'll write about my experience being a part of this historic moment as a PAPM.

Honestly, I didn't choose to be an Election Officer. My school picked me, for whatever reason they did, and I went along with it. I went to the first briefing in November of 2017, I think it was. It was held at the city hall, and almost all the Election Officers of the area were in attendance. We listened to the Powerpoint presentation the Suruhanjaya Pilihan Raya people had to give us, and we were informed of what our responsibilities were. We were also given a file with the slides as well as a book with all the relevant material pertaining to being an Election Officer. 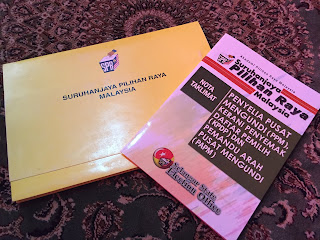 They were helpful things to have, and if I'd bothered to read through the material, I'm sure I would be a lot more knowledgeable about the electoral process than I am. Alas, I was me, and at the time I wasn't too stoked about the process. I was pessimistic, and thought it wasn't going to change much. Thank goodness I was wrong.

We didn't get any updates about the elections until they were announced sometime in April. By this time, I had already resigned as a teacher, so I went to school to get clarification as to my status as an Election Officer. Was I still one? If I were, what was I supposed to do?

The nice people at the school told me that I was still an Election Officer, and that any citizen could be one, regardless of job status. I was to report to the Ketua Pusat Mengundi, the Head of the Voting Centre, who was a teacher. I also had to hand in a passport sized photo to the school clerk to make this thing: 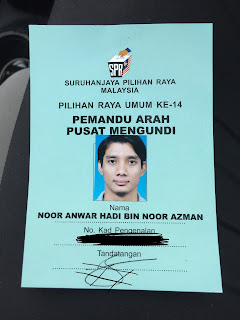 The above thing is called a Pas Pusat Mengundi (Voting Centre Pass), and only people with these passes were allowed to be in the Voting Centres, besides the voters themselves, of course. Anyone who wasn't voting there or did not have a pass were not allowed to be in the Voting Centre. This made sense because if people who had no business being there were there, it might cast doubt on the voting process, as those who had no business being there might be up to something, something that might tamper with the election results.

A day before the elections, we were summoned to the Voting Centre to set up the place. We went to the district's vote-counting centre and retrieved the things we needed to set up our individual Voting Centres. 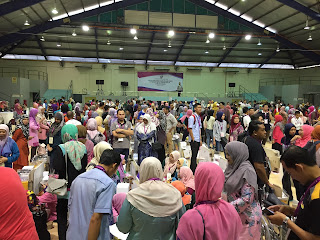 As you can see, there were a lot of people there. My Voting Centre brought 15 people to check and carry the stuff back to our Voting Centres, and there were quite a few Voting Centres around the area. What we had to do was to make sure everything that was supposed to be there was there, and if they weren't, to claim it from the SPR Officers who were there to facilitate. Once everything was accounted for, then the Ketua Saluran would have to report to the SPR Officers and get the blank voting ballots and indelible ink.

Since I was a PAPM and was only there to carry a wheelchair, some umbrellas, some posters, some banners and other things, I didn't have much to do there. I was mostly just waiting around, watching people do their thing, and try to help when I could. 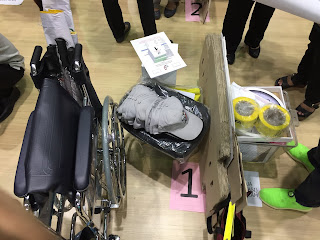 Each Election Officer got a t-shirt to wear on the day (ours were all sized XL and bigger), and some even got caps to wear. These were not obligatory apparel for the Officers, but it did help us look the part. I'd like to imagine that people who saw me there wearing the shirt on election day had no doubt about what I was doing standing there at the Voting Centre, telling people where to go.

After that whole process, we carried the stuff back to our Voting Centre and set up the stations. I helped with setting up the registration table as well as putting up the banners that informed people of what the stations were. Others set up the actual voting rooms and made sure that directions were available for people to follow to their designated Saluran.

On the voting day itself, we gathered at the Voting Centre at 6.30am, had breakfast and set up the places even more. We put fans where it was most helpful, set up the laptops for registration purposes, put up tapes to make sure the passage from the registration table to the voting rooms were clear, made sure everything was as ready as it could be to receive voters.

At 8.00am we opened the gate for voters. voters showed up as early as 7.15am. They really wanted to get in early and have it done to enjoy the rest of the day. It was a good move on their part, in my opinion, since people started coming in big numbers as the day went by. The peak time people were lining up was at about 9.30am-10.00am. The lines were really long and people had to wait in line for up to three hours just to vote.

As a PAPM, I did my best to manage to traffic. I pointed people in the right direction, and listened to people when they expressed that the lines were too long.  Saluran 2 was particularly long. It was a Saluran for ageing people. Not particularly old like 80, but definitely on their way. I felt sorry for them having to stand around for such long amounts of time, so I made sure that they would only line up in the shaded parts of the school. I also carried benches from the school canteen and arranged them along the line so that the voters could sit down while waiting in line if they wanted to. I did the same for Saluran 1 as well. Their line wasn't as long as Saluran 2, but they definitely had to wait a lot longer than I would want an 80-year-old to wait. People in wheelchairs started coming in as well, so I was tasked to help them move through the voting rooms.

I didn't sit down for hours doing all this. The traffic slowed down a little bit as mid-day came. I went to have lunch and got to sit down for a little while while others took my place in giving people directions, pointing out which Saluran was where and helping people move around.

I resumed my duties until the end of the day, and by 4.00pm my feet were screaming into my brain to retire. Fortunately for me, the final hour of the voting day did not see so many voters coming in anymore. I could sit for longer periods of time.

When 5.00pm finally came, we packed up, carried all the benches back to the canteen, cut off all the tape, took down the banners and posters, and called it a day. I went back home and napped.

While I was working as a PAPM, I could feel the energy in the air, an energy of change. People were out to prove a point, the point being that the people had had enough and wanted to take what little power they had into their own hands to turn this country around. A couple of times I was holding back my tears just thinking about if the Federal Government actually did change, and the changes that would come with it.

No more culture of fear, no more getting away with theft of public funds, no more sucking up to those in power only to benefit yourself, more accountability, more transparency, more freedom of expression. These were/are my ideals, and even though I wasn't very sure that it would be a reality, I liked the thought of it so much that it moved me.

I stayed up until 4.00am that night. They still wouldn't announce it, but the Astro Awani screen did say PH=113, and that was enough for me. With that I went to bed. I woke up to a New Malaysia, and it has been an amazing ride so far. Here's to a better Malaysia for all of us.
Author: anak pak man at 2:29 PM