"It seems to be the way that everyone else gets around," Drive by Incubus.

Tomorrow I'll be conducting a mini-lesson on "How to Write Haiku" in my TEP387/EDUC393 class.

Haiku are basically a form of Japanese poetry that are short and meter/syllable-specific. Having said this, English-users have adapted it and a form of English haiku has been established. In the English form, haiku consist of 3 lines, each having 5, 7 and 5 syllables respectively. Convention dictates that haiku are poems about nature, but we're not too rigid about that, are we?

Since researching English haiku, I have to say that I have grown fond of it. It's a simple form of creative expression, and i'm all for simplicity.

So, in the interest of this makin-lama-makin-neglected-blog, i will write one haiku daily, and i will post those haiku here weekly (I'll try to post every Monday).. I may choose to publish less than seven a week, but not less than 4.

They may be in the form of pictures (like the one below) or actual typed posts.

So let's see how this goes, shall we? 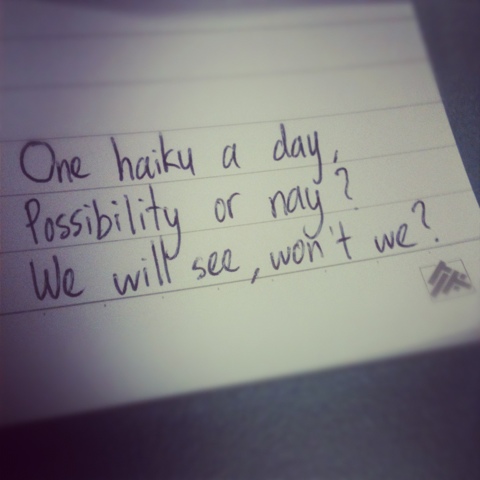 yeayy...
finally updated.. been waitin for so long...
good job bro.
feel free to follow my blog too..

thanks bro..
really appreciate it..
may peace be upon you..tc

great. we'll be waiting for the update

can't wait to see the progress!!

read mine:
SPM now finished already
University, i will gladly get ready
pass with flying colours with or witout tragedy.

if you want to know more about poetry...the basic thing you could possibly do check out Kirszner and Mandell book of Literature. =)

p/s: hope to meet other teslian here...so i can improve my english...huhuhu