"Don't ever let life pass you by," Warning by Incubus.


So the next morning, we got up early, had breakfast and proceeded to the DFO again because someone left her wrist watch at the wall-climbing site. Alhamdulillah, it was still there when we went there, so we quickly made our way to the Twelve Apostles along the Great Ocean Road. Even the name of the road had us excited about what we would encounter along the journey to the said disciples of whatnot.


It would be a 280+ kilometre drive, with plenty of pitstops along the way with me being the lone driver, so it was going to be fun.


First up, we branched out near Geelong and visited the Victoria State Rose Garden. There was also a mansion there. Boring stuff, to be honest, but having cameras meant we were able to have some fun. 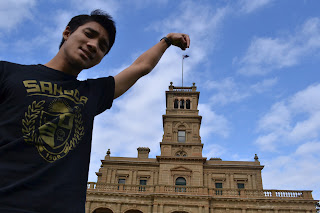 The mansion weren't THAT big, really.

Then we continued our drive along the road and stopped over at a place called Torquay to get some lunch in the form of fish & chips as well as snap a few pictures of ourselves. Ha. 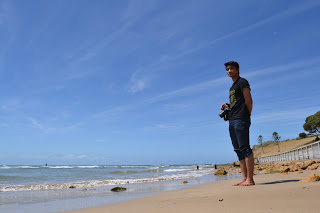 Then we proceeded along the road and spotted a lookout point that had a lighthouse, so we checked it out, and, surprise, surprise, wondered how it would be like to be models. Buy Canon, because everything else sucks. 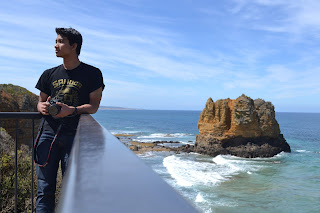 Oh hey, there's a big rock over there. I'm just gonna pretend there's something way more interesting out of frame. 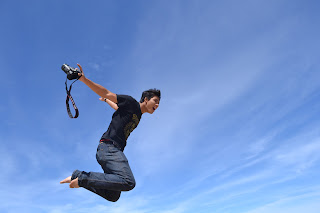 We continued our drive along the road. What road, you ask? 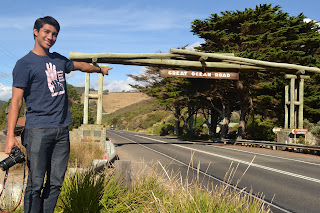 Honestly speaking, the Great Ocean Road (GOR) has provided me with the best driving experience in my life to date. The sceneries along the way were nothing less than breathtaking. There were even certain stops on the road by the cliffs along the way for people to take in the scenery a little longer.

At one of these stops, we were fortunate enough to run into some other Malaysians who were driving all the way to Adelaide (that's like a whole different state. Google map it to find out just how far that is) so we chatted with them for a bit and they were kind enough to take a picture of us three. 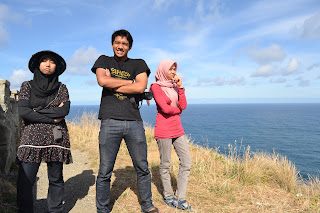 Rare picture of the troubled-trio.

After a few more pictures, we moved on, since there was still a long way to go, and the road was really winding, so the drive was slow (not that I was complaining).

Then after a few more hours of driving very carefully (since the road was not for the weak of heart), we finally made it to our intended destination, the Twelve Apostles. It. Was. Magnificent. Made the whole trip worth it. 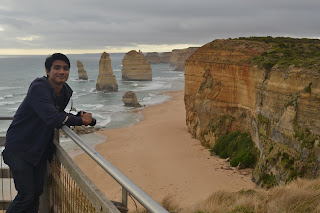 But then we were only stuck at the lookout area. We (me especially) wanted to go down to the beach, since I've seen a few pictures of people being on the beach there, but no stairs were in sight. 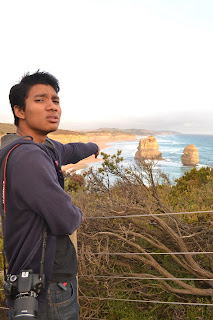 I really wanted to go down there.

But then upon closer inspection, we spotted some people who were already on the beach. They were a long way away from us, but they were definitely noticeable. We searched the vicinity if there were any stairs around the area to take us down, but couldn't find any.

We inferred that they must have driven down the road (away from the lookout point) to get down there. We weren't definitely sure, but we jumped into the car anyway in search of a way down.

Turns out, the steps that would take us down to the beach was only 500 metres away called the Gibson Steps (no relation to the guitar-brand, I presume). I was overjoyed. I mean, joy couldn't even begin to describe the feeling that I was experiencing when i was going down those steps. To be able to be there to watch the sunset. Just. Pure. Awesomesauce. 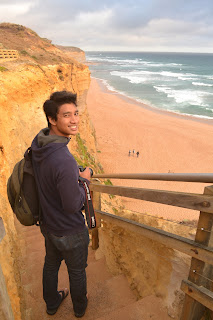 I was really happy, if you couldn't tell. 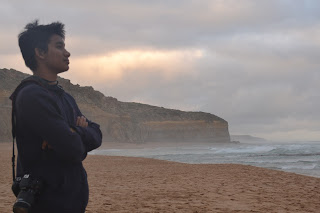 Got lost in my thoughts, being at a loss for words.

After being there for a while, and proclaiming that that was my favourite location in the whole wide world, even taking a dip in the water, we packed up our things and bid farewell to the beach that stands as proof of the sheer majesty and power of Allah The Almighty. The drive to the Apollo Bay YHA was a dark one, but alhamdulillah, we made it safely there.

Woke up the next day after a good night's sleep and had breakfast as well as play some checkers with my friend before embarking on the journey back. 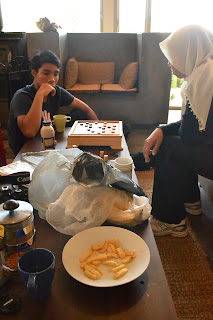 As expected, I lost. 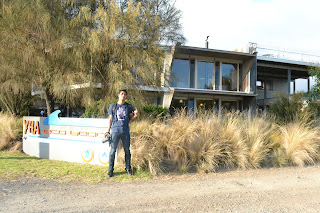 We drove back to the city and explored the city before our flight back to Sydney later that day. 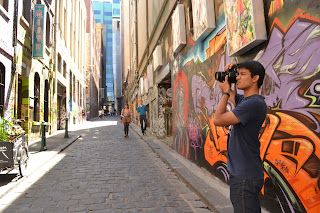 Visited a few lanes that were covered with graffiti. 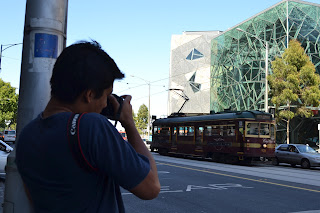 Then we drove back to the airport just in time to drop off our rented car and hop on the plane back to Sydney.

This Melbourne trip was one of the more awesome trips I've been on. Plus, it was my first experience planning and executing an "overseas" trip (meaning that we had to get a plane to get there) and I'm glad that it turned out to be a good one. I had great help in the form of my two friends TQ and Qya, and I really can't deny that without their help, the trip wouldn't have been as well-organized, so big thanks to them. A big thank you also goes out to Dayang for taking us around the city on the first day.

Next up, Gold Coast baby.

oh man! the pictures are niceee! and and I need to visit Melbourne like noooouuuw!! I like your quotes :

"Buy Canon, because everything else sucks." muahaha! gang la kita ya :P what model is that?

thumbs up for team canon yaw! ^^

wht model of camera do u use ?