“She’s not bleeding on the ballroom floor just for the attention,” Time to Dance by Panic! at the Disco.

Yeah, so I downloaded “A Fever You Can’t Sweat Out” by Panic! at the Disco about a week ago at my Streamyx-ready home and I’ve been listening to it ever since. Dude, this album just simply ROCKS! I don’t think one track is worth skipping, except the Introduction and Intermission of course. You may be wondering, who the hell are Panic! at the Disco? Well, for that, I think you should use what your Mama gave ya and go google ‘em. You may also be wondering “Hey, isn’t that album, like, so 2006?” and I say yes. My bud, Shaheir gave me a copy of it when we were still in school and I loved it, but then I gave it back, so 3 years without Panic! later, I rediscovered that album at Mp3 Boo when I was picking an album to download. Upon seeing the name "Panic!", I quickly and happily downloaded it to fill my ears with good music and excellent lyrics.

Back to this post. Today, I played rugby after what seemed like forever not tackling anybody. I’ve got a sore left quadricep, sore right gluteus maximus, sore right bicep and a chipped tooth (very small chip) as souvenirs, but I also got these: 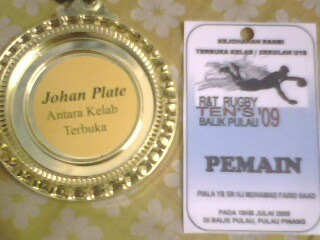 Thanks to the Penang Blues team for inviting me over to play with them and rekindle the passion that I once had for rugby. Without them, all my suppressed aggression would have been vented somewhere else, somewhere inappropriate. 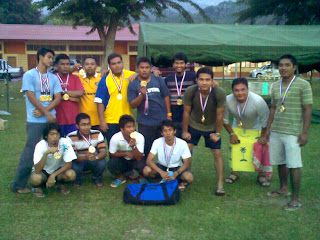 Sigh. Lately, I’ve not been in the mood for writing. I wonder why.

Whatever it is, I hope it’ll resolve soon, because I really do like expressing stuff on paper (or computer screen, whatever).

‘Till next time kids!

kacip,
thanks!
hehe, tapa2.. enter for fun ja kan? as long as u guys had fun, mission accomplished lah tu..
:)

awesome,congrats pic! reckon u enjoyed the game,that's great. em,anyway chillun came up with a bright idea that those fellows are clueless about who panic! at the disco are. well,

oh that was one incomplete sentence. they do know. :)

oh typing error,was typing it quickly on my messy workstation. (papers are occupying it.) it's actually,let me rephrase,ehem.

chillun came up with a bright idea that those fellows are clueless about who panic! at the disco are. well,

eh, you were in mrsm balik pulau?
that's my school! =P

Congratz dude! BTW,nice medal n tag. U chipped a tooth? Hahaha...Must be painful right. Hehehe...I love Panic! At the Disco. Dh lama xdgr lagu dia. Rather odd that their founders, FOB turned from 100% to 30% (in my opinion la...From the quality of the songs 'Dance, Dance' and 'Sugar We're Going Down' to 'American Suitehearts'...). Can u gimme the list of the songs from PATD?? I want to hear them.

p/s: When will they produce a new album? I want a new album from them. Really!!!

wida,
you can google their songs if you like.. their latest album is called Pretty.Odd which feature the tracks "Northern Downpour", "That Green Gentleman" and also "Nine in the Afternoon". I think some of the tracks in there are cool too, but "a Fever" is still the best, IMO..

aha. you're tagged with that sarcasm tag because you have the letter A in your name. =)

Max,
Yeah, it's a challenging one.. I take up the challenge! Thanks 'cher!