So I just got back from Malaysia a couple of days back, so instead of wasting my time looking for stuff to write stupid comments on Facebook, I will update this blog with some of the stuffs that I did the whole 5 days that I was there. So if you guys actually wanted to read something interesting, go read Cinta SMS instead. Here goes..


Touched down in KLIA at about 9.30pm (if I remember correctly). Took the ERL to Sentral to meet up with my family. Had dinner with them near Pudu and at about 11.30pm, AG (Hujan) picked us (my little brother, Boi and me) up to go play a weekly futsal league called Liga Ulama' (The Ulama League) at Subang. 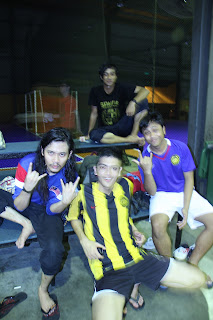 Ai is not in dis pikcher.

We played until 2.30am, with me scoring 3 goals in 5 games (two of them against AG's team). My teammates were Boi, another Boy, Zul and Alif (all three I just met there). They were great. Then AG sent us back to our hotel and we slept like logs.


Alhamdulillah, I got up that day and went down for breakfast at about 9am. Mat Luthfi and his father came and joined us for breakfast as well as a little chat. 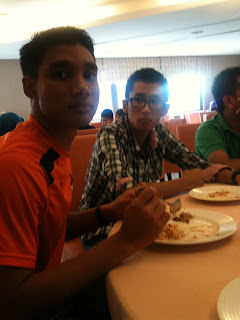 After breakfast, we chilled in our hotel room for a bit before proceeding to have lunch. My father organized a little feast for friends and family at the Chicken Hut at The Mall. There I got to meet up with some cousins, aunts, uncles, friends as well as make some new friends. 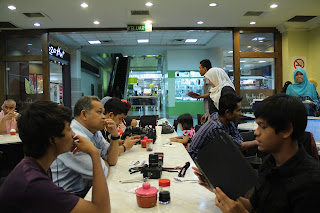 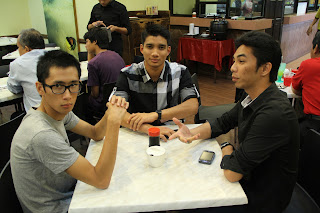 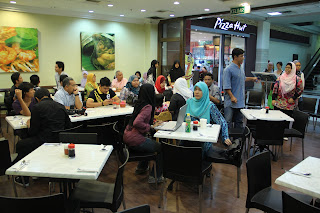 Some of the sights at Chicken Hut.

Then I went to meet up with the family back at Midvalley Megamall. Then, off to rehearsals for tomorrow's event at Dewan Tun Razak 2, PWTC. Got to shake hands with Dato' Affendy (the creator of 1MalaysiaTV), Ahmad Idham and Cat Farish. Again, no pictures. The rehearsals ended at 2am.

The day of the launch of 1 Malaysia TV. After breakfast, we went down to the hall and shook hands with a few people. Took some pictures and signed a few autographs. 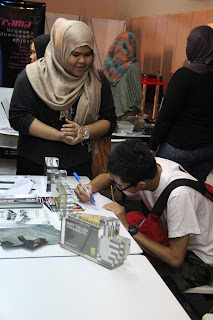 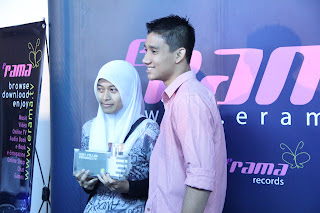 Then I went up on stage to fail at speaking for 30 seconds in front of a few hundred people, not to mention the Prime Minister of Malaysia. *facepalm 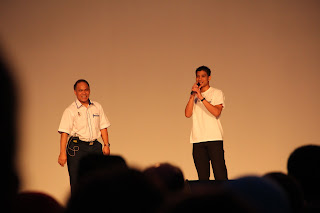 Me (sort of) speaking. 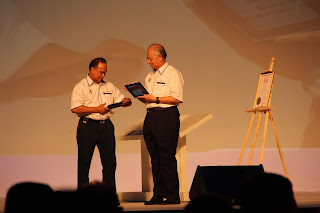 Yeah, he was there.

Then we continued taking pictures and signing autographs until Mat had to leave at about 5pm. Had a good time with him as company. Crazy, he is. 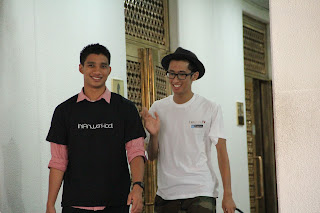 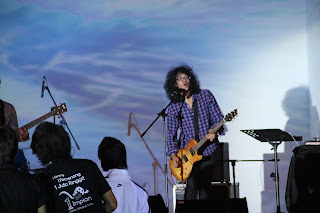 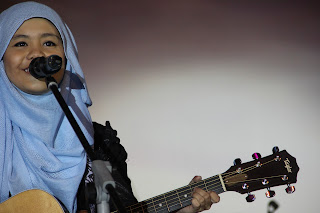 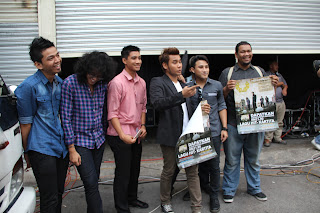 Me with Awan Band and Awi Rafael.

After dinner, we set off for Melaka. Checked into a hotel there and slept in anticipation for the next day.

After breakfast, we went to my aunt's house for a visit and stayed for lunch. Then we headed to Dataran Pahlawan to join Cat Farish and crew for some 1 Malaysia TV promotional efforts. 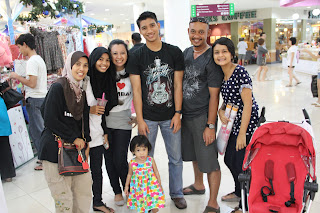 Me wearing my new Morning Rocket shirt with Aunts, Uncle and cousins. 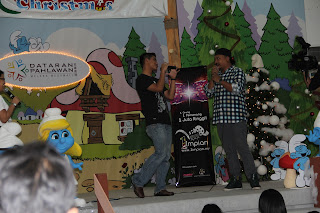 The turnout wasn't that high. The people that came were mostly people who happened to be shopping nearby. But some did come up to me and ask for a picture, so that was nice.

Alang-alang you guys are reading this, if you have a mobile device (Blackberry, iPhone, iPad, Galaxy tab, etc.), try browsing "www.1malaysiaiptv.com" and download the application. If that's too much of a hassle, go straight to your app store and search "1 Malaysia TV". It's free (hooray!). It's an app that allows you to stream Malaysian TV channels like RTM1, TV3, TV al-Hijrah, etc. wherever you are in the world for no extra charge. It'll only use up internet, so watching using wifi is highly recommended. Support the Malaysian mobile TV industry!

After wrapping that up, we went for dinner and then went back to the hotel to sleep. Early day tomorrow.

On the road by 5.30am for KLIA. Nothing to highlight on this day. Just getting on a plane back to Sydney.

So that wraps it up for the whole 5 days. It was exhausting, but definitely a lot of fun getting to make so many new friends as well as meeting up with old friends. Experiencing something totally new. All in the process of growing up. I ask Allah for guidance towards the straight path.

I wasn't kidding about asking you guys to support the Malaysian mobile TV industry. Please do. Plus, it's free, so it's not as if you lose anything from supporting. Orang Melayu kata, bukan rugi apa pun. It's really convenient, especially for an overseas student like myself who wants to catch up on what's happening back home. Paihni bleh la layan Tentang Dhia sniri daripada dok baca tweet ja. Eh? Dah habih dah ka? Alaa..

A big thank you goes out to everyone that made all that you have read possible. My family (especially Bapak), Cat Farish and crew, AG, Mat, friends that came to meet me and hang out, the people at erama, and everyone else that I may have left out. THANK YOU! May Allah bless you all.

May peace and blessings be upon you.

"I've never done this before," Promises, Promises by Incubus.


Everyone is invited to attend: 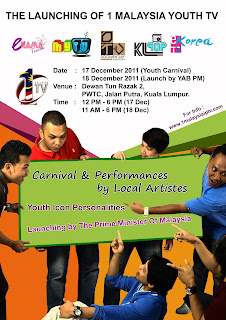 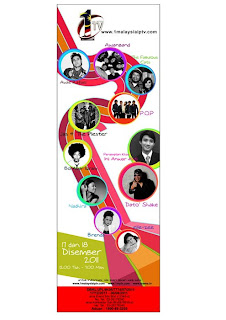 All kinds of cool stuff will be there. Oh, but I'll be there too, on both days. So inshaAllah, just one uncool thing on schedule. It would be awesome if you guys could come.


Oh yeah, and a secret: Mat Luthfi is also scheduled to make a special appearance. So a BIG BIG reason to go right there. But you didn't hear that from me, yeah?


May peace and blessings be upon you.


p/s- Free food might just be given out, if you come early enough. Again, this stays between you and me, kay? :P

"I wish nothing but the best for you," Someone Like You by Adele.


With the end of the exams also comes the end of the semester, marking the end of a schooling term. We say goodbye (for a while) to lectures, classes, assignments, weekly readings and all the things that makes university what it is.


However, the end of this semester in particular is of exceptional significance to me because it also marks the end of my seniors' (Cohort 1) 2-year stint here in Macquarie University, meaning that they have to go back to Malaysia and complete their remaining 1 year of teacher training, and that makes me very sad.

You see, they were not just my seniors. They were also my friends, football teammates, guiders, and some of them my housemates. They were a big part of my life here in Australia, as I imagine they were for most (if not all) of the people in my cohort (Cohort 2). 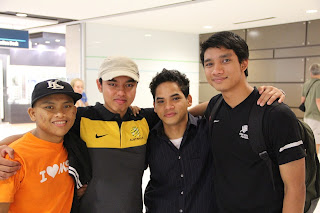 Sending Amir off. (From left: Azlan, Amir, Shariman & me.) 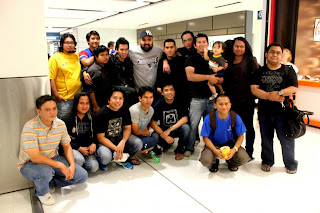 Goodbye Faiz, Farid, Pidi. (The rest are the sendoff team) 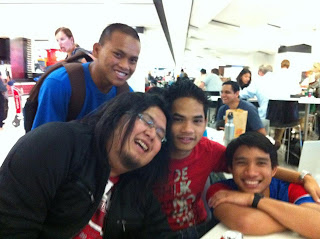 Last meal with Hilmi in Sydney.

Our friendships have come to teach me a deeper understanding of brotherhood in Islam. They have taught me to always respect others and that I am not alone in this world. I will always have people who I can turn to for help and advice. Always willing to help, they are. They will always have a special place in my heart. 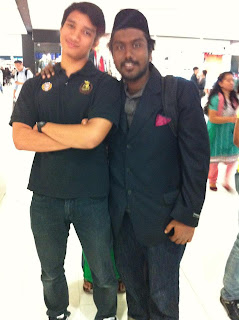 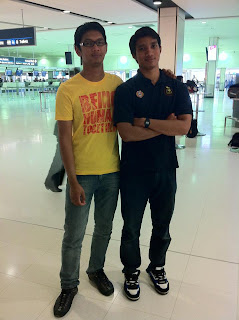 I praise Allah for bringing them into my life. I honestly would not know how I would have survived without them. And I can only hope that the almost-one-year experience with them was as sweet to them as it was to me. I pray them the best in this world and the next. May they bring goodness to wherever they may go.

May peace and blessings be upon you.
Author: anak pak man at 9:49 AM 13 comments: