Good Columnists and Being Sure

So I was scrolling through Twitter the other day (as I do on any given day), and I came across an article that was talking about a joke involving George Michael in the movie La La Land. It's a quick two-minute read, so if you'd like to read it, Here it is: 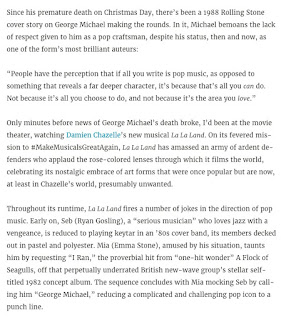 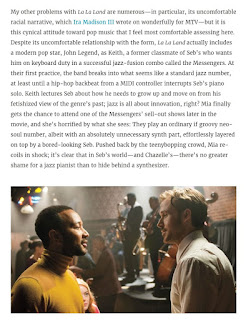 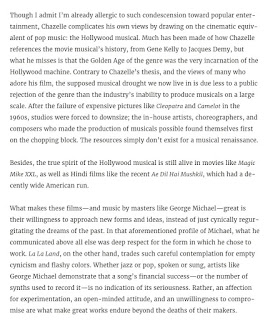 The full article can be read here.

Through reading this article, I realised why I was a bad columnist. It's self-doubt. Or rather, the way it currently manifests in my writing.

While reading the article, what became immediately obvious to me was the way in which the writer was so very sure of what they were saying, or at least they had the appearance of being sure. There's a certain sure-about-themselves-ness that is present in articles written by "good" columnists. It makes sense if I think about it, because these writers are most probably well-read in their fields and they can write with authority on the topic in which they have been given the task to write, because they studied the subject matter and put in real work that is necessary for a good piece of writing to emerge.

The way I see it work is, a person thinks up of something to write about, or alternatively is given a topic to discuss in their writing. They then study up on that subject matter for hours, days, months, even years to get a firm grasp of what they were about to write about. Then, after that extensive research, they get to their documents and start typing. If any new questions emerge, they'd find material that would help them with being sure about what they had to write about. That's how it works. That's why people are paid to write those columns. Because a lot of hard work has to be put into writing a convincing article.

I have a lot of self-doubt because I am not as learned, nor do I put in the effort to read up on the topic at hand. Take this particular article, for instance. I could have quickly Googled "how do columnists write" or something similar, but I didn't. I just sat down in front of my laptop and typed away. When I encounter a question that I cannot answer, I do not do my research or find the answers through the miracle of the internet. I instead say "I don't know" or something similar and rest at that. Lazy work, I think anyone would agree.

And because I have self-imposed rule to write as many words as I can in one sitting, I end up elaborating that self-doubt and analysing why I don't know the answer to a certain thing or explore why my views on a subject matter is flawed and self-critique, right in the same article, as those doubts pop into my head. Because it's easier than spending time reading up on a subject matter that would require me to learn something new. I choose not to hide those doubts because it allows me to put more words on a page, and that makes me feel good. I can say to myself "ha, tengok tu, boleh pun tuleh banyak! Hang rajin betui Anwat!" when in reality, it's self-deluding to think that.

So for me to achieve the "sureness" that good columnists possess, I will have to be willing to put in the work. I will have to be more rajin in doing my research and find out the answers instead of being okay with just "I don't know and here's why". But I most probably won't, because it's too much work, and the good feeling that I get from putting words on a page is a lot more fulfilling than the work required to actually produce a cohesive and well-written article. So I'll most probably continue doing that until it feels like it's not enough anymore. Then, maybe, I'll start researching things before writing stuff.