So the art group by the name of “Zine Satu Malam” published a poster announcing that they are taking in new writers. I love the idea of the group, and whether or not I am a part of them, I support the art movement they are propagating. I tweeted the poster so that interested people can know about them and their pursuit for new members. The poster looks a little something like this: 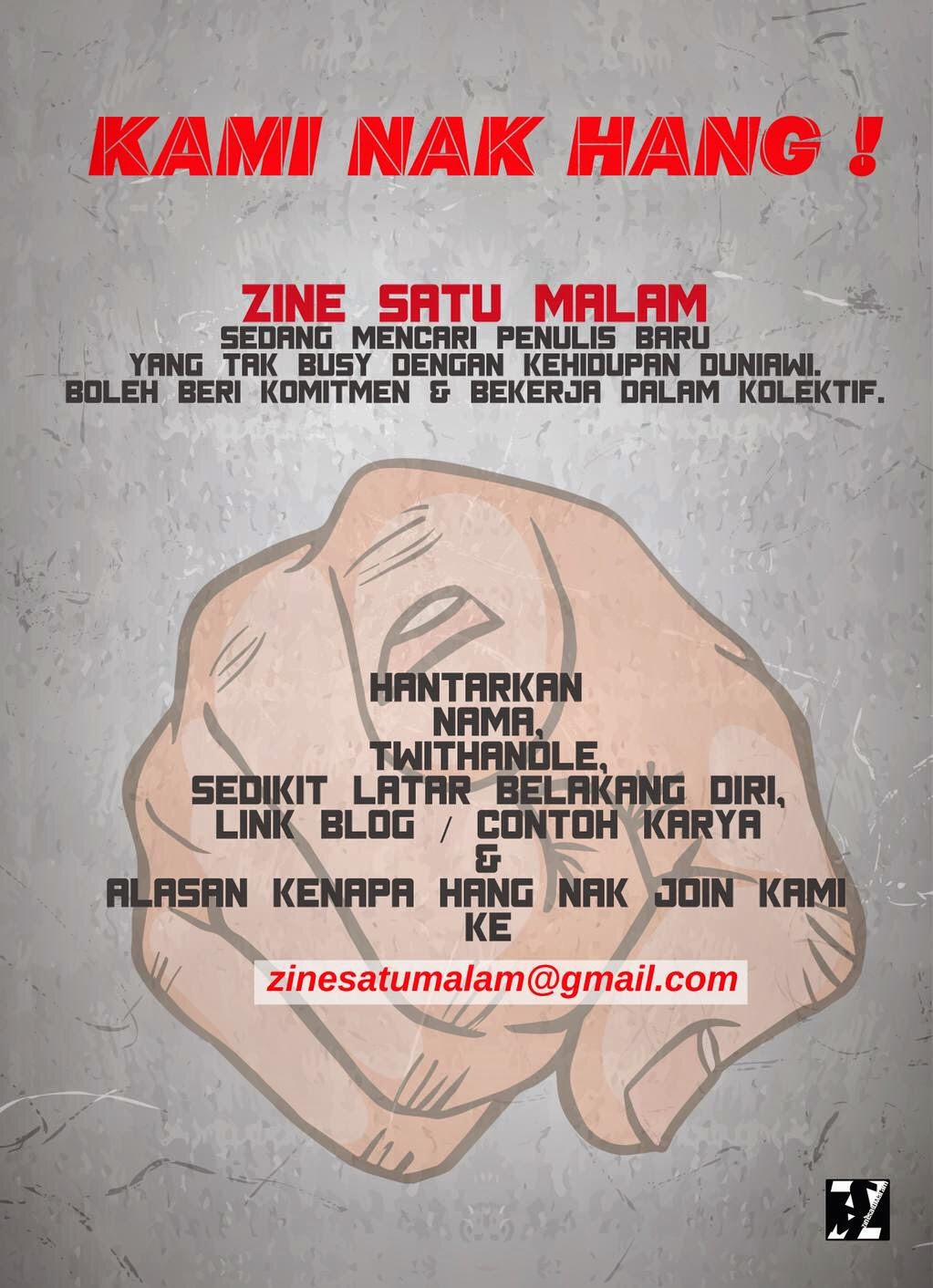 So in response to the poster, a person replied saying that they wanted to join, but felt that they were too green to pursue it. The exact words used were “tak cukup confident and masih mentah lagi”. I’d like to discuss this rationale and how we (myself included) should view it in order to move forward in life.

Firstly, why do we say things like that? Say that we are unworthy of an initiative, even though they fall into what we wish to do in life? In my opinion, the most probable answer would be: fear. We are afraid. What are we afraid of? Failure, most probably. We are afraid when we do something that is outside of our comfort zone because we might not do very well. And when that prospect freezes us dead in our tracks. It has frozen me a few times in the past, and I’m sure there will be instances in the future where it will happen again.

Thing about being frozen is that we don’t move forward, we don’t grow, we don’t do anything about it. But we still have that desire to do those certain things, and we’re painfully aware of that, so we blame ourselves for not doing anything about it, and self-loathing comes about because of our inaction. It’s a vicious downward spiral: want to do something, confidence too low to do it, end up not doing it, hate self for not doing it, self-confidence is lowered from the self-hate, even less of a chance to do it, hates self even more… You get the idea.

What we need is to break that cycle. To do that, we need to change the way we see that outside-our-comfort-zone zone. That unsafe place where possibilities for failure are endless. We need to see it as a place where not only failure is possible, but also success. The comfort zone is great for chilling and stuff, because everything there is pretty much a given, but outside of it is where we grow, where we are able to face challenges and beat them, and come out of those experiences stronger. It’s like a video game character that has to go on a long journey away from home. If they just stayed in whatever village they hailed from, they’d be fine too, but they’d never collect the experience points of going on the road and battling wild pokemon in tall grass. They would never level up if all they did was go to Professor Oak’s lab to drink his coffee.

So if we want to be not “mentah” anymore, we’re going to have to step into the fire and cook ourselves. Especially if we’re no longer students in school, no one’s going to push us into a frying pan anymore. It will be up to us to masak ourselves by turning up the heat and bearing with the discomfort that comes with it. The question becomes: how much do you want it? The more you want it, the more you will goreng yourself. Or rebus. Or even bake. Whatever tickles your fancy.

So back to the responder to my tweet earlier. They ended up applying for membership with ZSM anyway, even before I had a chance to respond to their tweet. I’m glad that person did that. It showed great maturity and initiative towards becoming a well-cooked person. And that’s all we want, really. To be cooked.

Life is a learning process. With art, it's how you express yourself. Art doesn't care if you're green or whatnot. Art is unique.

Why, oh why do you have to be so relatable tho.