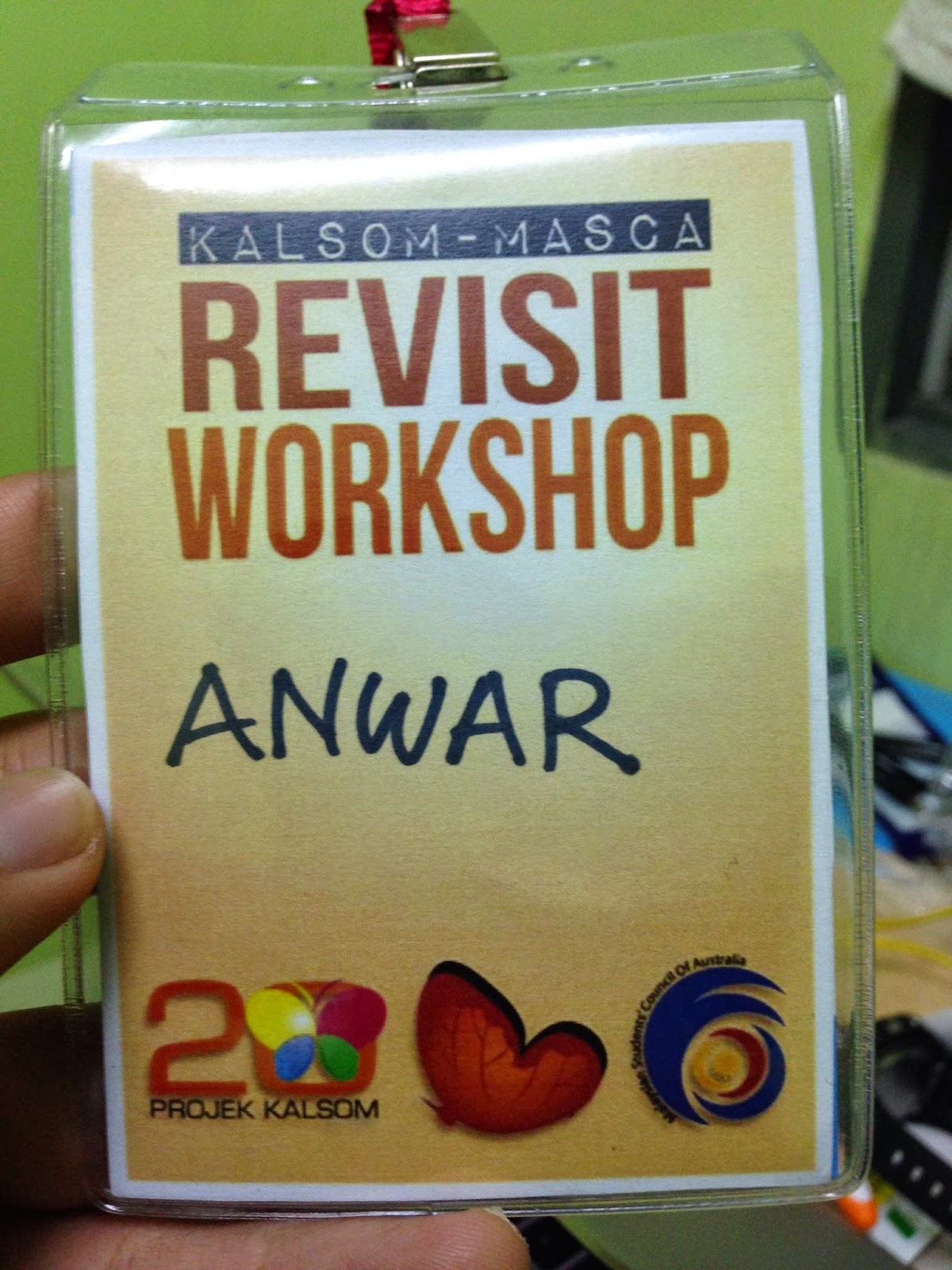 So last weekend I went on a programme called the Kalsom Movement, which was conducted by MASCA (Malaysian Students’ Council of Australia). The Kalsom Movement was established in 1994, and it is a programme that aims to help educate and motivate secondary school students in rural areas of Malaysia who have the potential but need that extra push to help them fulfil their potentials. You can read more about The Kalsom Movement at http://projek-kalsom.org/ .

I participated in the capacity of a facilitator. The programme was brought to my attention by the Deputy Director of the programme, and I found it intriguing and wanted to be involved as well. Alhamdulillah, I was able to attend and be part of a wonderful experience.

The programme runs a full week, but I was only able to attend the first two days of it (last Saturday and Sunday) because I have a job to go to on the weekdays. The first day was about preparing for the programme that would be run the next day at the school that we were going to, SMK Dato Syed Ahmad. We reviewed the modules and activities that were going to be conducted and rehearsed them to make sure that we were ready for what was going to happen the next day. The prep-day was great, since I got to make new friends and be in an environment where everyone was very passionate about being there and helping out, since they were all volunteers too. Added to the fact that most of them are or were, in one capacity or another, part of MASCA, which represents pretty much the best of the best Malaysian students studying in Australia, and you get a really inspiring bunch of people.

The second day, we had to wake up super early in the morning to get to the school in Kuala Nerang before the students arrived in school and set up the hall in which we were going to conduct the programme. Then when the students arrived, we conducted what we had planned the previous day. We did three subjects with the students, namely History, Mathematics and English. Needless to say, I was most useless during the Math-section, but I got to contribute my share during the History and English parts, so that was good.

All the facilitators got to groups of 4-5 SPM candidates to help out throughout the day, and I got a group of 4 students that were very shy-types. It was tough for my facilitating partner and I to even get two sentences from them at any one time. But I think by the end of the day, we got them to come out of their shells ever so slightly, since we had to do some activities that required acting and performing and presenting things, so that helped in getting them to be more comfortable with speaking up. At the end of the day, our group even won the most points from all the competitions and became the best group of the programme (admittedly, even we were astonished by this turn of events). The programme adjourned at around 5.30pm and by the end of it, we were all so pooped, but all of us had smiles on our faces, saying that the exhaustion was well worth it.

I really liked being in that environment, around all the facilitators, where I felt that everyone was so competent and passionate about what they were doing. Not only that, they were a fun-loving bunch of people as well, so while getting things done, we were always up for a laugh about something or other. I don’t think it’s very common that you find yourself in a situation where you’re in a group of people that you can instantly be productive while still have good fun with. Thankfully, I get that feeling when I’m school too, so I am very grateful that that’s the case.

A question that was asked to me and continued to hang over me throughout the programme was “why are you volunteering to teach, while you are already a teacher?” I already teach as a job, why did I choose to do the same thing in my free time? I’m not entirely sure. Maybe it was because it was an opportunity to work with MASCA, an organisation I have always liked because of the programmes that they run and the people that run them. Maybe it was because it was an opportunity to give back to the community, and I am enthusiastic about doing that in whichever way I can, even if it was something I was already doing as a day job. Or maybe it was because teaching is still my passion, and when presented with an opportunity to teach, it’s hard for me to say no because so much of me wants to say yes. But then again, it could also be a combination of those reasons, and maybe even more.

I was glad I participated. It was an amazing experience, with great people and wonderful students as well. I encourage anyone and everyone to participate in such activities should they come your way. It really is an awesome experience and you learn so much while giving back to the community.
Author: anak pak man at 1:31 AM

Wow this is cool. This is so cool! Keep it up, sir!

Hi! You might not remember me but it was nice meeting you. I do not know that you are a Swiftie. haha