So as you might have guessed from the highly literal title up there, yours truly shall be publishing a book next February. Here's an announcement poster: 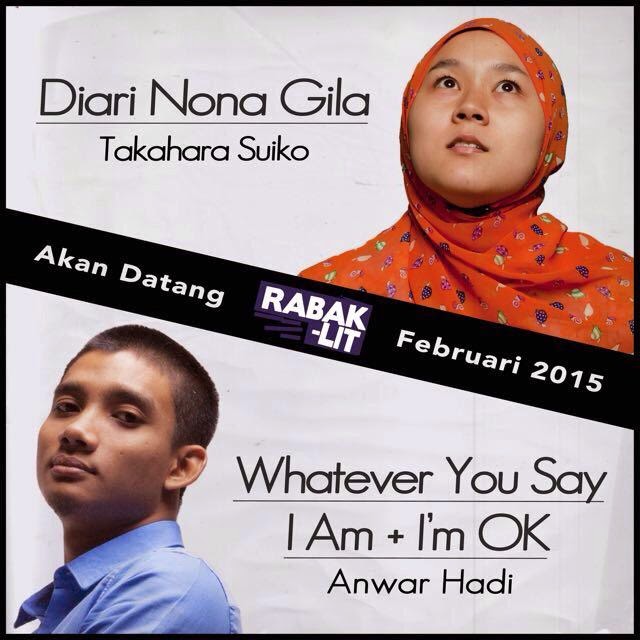 It'll be joint-launched with a book from one of the most talented local singer-songwriters to grace the land, Miss Takahara Suiko. My talent is micro-sized compared to hers, so do yourselves a favour and check her songs out either on Youtube or on Youtube!

As you might be able to see from the poster there, my book will be a double book, so you'll have two covers to not judge. Not an easy feat, but I know you'll be able to handle it. I BELIEVE IN YOU!

Why the double book? Well, I thought it'd be cool to divide the book into two parts, the non-fictional part (Whatever You Say I Am) and the fictional part (I'm OK). Poyo ja, kan? Tapi aku memang poyo pun, so takpa la. Hahaha k

The contents of the book mostly consist of the things I've written here, on the blog, with a few extra things, such as the final parts of my 2011 project "By The Water", so if you want to know how I ended that thing, you can find out in the book! Hooray!

Okay, you might be able to detect that I'm writing this in a more-excited-than-usual tone, and it should be getting annoying by now, so I'll just leave it at that.

congrats bro for your achievement...
btw, i don't think this post is annoying...
because i enjoy this writing style compare with previous post....
keep it up and happy new year.....

Yeay, finally 'by the water' ada ending. I thought you would never ever end my curiosity.