So I went back home to Kedah for the extended weekend, and I got nothing done. I was supposed to, at the very least, read some pages off the book that I’ll be reviewing by the end of this week, but I didn’t. This coming Sunday will also be the first open mic I’ll be going to this year, but did I practice any of my songs? No. I also have a play script to memorise. Did I even take the script out of my bag? You bet I didn’t.

So what did you do Anwar? What I always do, sleep excessively. And there’s really no one to blame but myself. I am just terrible at getting stuff done when at home. Oh well, just one more thing on the infinite list of flaws you have there Anwar.

Anyway, I should write about those three things right here rasanya. I have nothing else to write anyway. So the first thing is book review, I’ll be reviewing Tuhan Bukan Manusia by Zharif Zainuddin. The review won’t be a major in-depth kind of thing pun. It’ll just be me telling whoever is willing to listen what the book is about, what I thought was good about the book, what I thought the book could have improved upon and to whom I’d recommend the book. But I’m about halfway through the book baru, so I really have to speed things up this weekend if I’m going to make my own deadline. I should probably spend as little time at the apartment as I can, since I seem to do very little reading when I’m here.

Second thing is the open mic thingy. Here’s the poster for it: 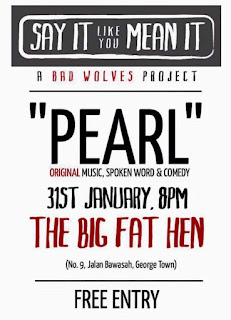 I’ve been performing at Say It Like You Mean It events for the past year now, and it’s been a very good experience so far. They’ve been wonderful at helping me out with getting me to perform my songs on stage and have helped me in more ways than one. If you’re around Penang and would like to see the show (which, besides my own bleagh performance, include comedy skits, singer-songwriter stuff as well as spoken word poetry), I would totally appreciate it if you come and say hi.

Third thing is the play. I auditioned for a role the other day for a play that’s supposed to be staged in March. I don’t know how much of it I’m able to reveal, so I won’t reveal that much. I play a 17 year-old school kid who has a passion for acting. I guess that part’s pretty settled, but it is quite a hefty script, and we have only five rehearsals to get the whole play done. It’s pretty ambitious, so I’m going to have to hunker down and concentrate on this one until it’s done. I don’t want to do it half-assed, especially since this is one of the kinds of things that I really do want to do more of in the future.

And for this blog, I still have to write five more (including this one) to meet my monthly quota, so I’m going to have to pay attention throughout the week to find things to write about and remember to put things down in the idea bank (aka my twitter drafts). Here’s to working hard towards meeting our self-designated goals.
Author: anak pak man at 11:55 PM